Uganda Project Baby! Day #18 – The Conga Dance really does get you closer to the locals!

The weekend is here!

Thought I woke up late and it was the afternoon but no, it was actually half 9 in the morning. My body clock must be out of sync. The lovely rainfall shower set me up for the rest of the day although the lock was broken so I had to be prepared to jump at the door if anyone walked in. They may get a fright seeing a naked grown man jumping at them from a dark cubicle haha.

Spent the morning in the communal area outside under the trees in the shade reading and chatting about the unknown with Sam and Katie due to Sam reading the God Complex. It was a good brain-stimulating morning after a week of concrete breaking and we even started debating. The morning was really quiet and there was hardly no-one to be seen, but that’s what you expect in the middle of a National Park!

After Lunch, a few of us wandered down the road for half an hour to the exclusive resort called Paraa Lodge, a 4 star hotel. We hung around on their terrace and the side of the pool. The hotel owners were more than happy to have us there providing we ate and drank there. Some people checked out their internet, but I didn’t as I wanted to go without the internet for a month or so. The people of Britain today are too tied to the Internet to appreciate the simple things in life that surrounds them! 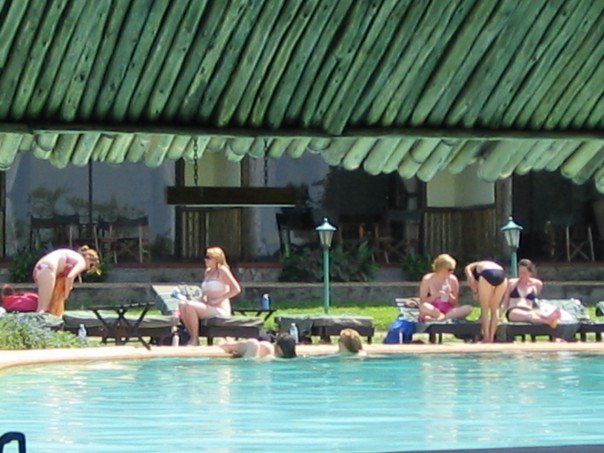 We went upstairs to the Explorers Bar and for the first time in ages, I had a COLD BEER! The condensation was running down the bottle and my god, there was a party in my mouth when I had the first sip…swiftly followed by a necking! The rest of the group turned up and we went out onto the balcony to have a 5 course meal for Alice’s Birthday. Expensive..but it was well worth it. The main was Beef Bourgnion and it was absolutely delish. At the end of it all, we got a complimentary drink of COLD passion fruit juice drink. Lovely! I could get used to this…At the end of it all, everyone contributed to paying for a really expensive wine bottle for Alice and we sang happy birthday! Bless her! She swiftly drank that!

In the afternoon, we were invited to watch a game the Paraa Football Team was playing in. Of course we supported the Paraa Team! So we hopped over the Nile on the ferry. Crossing the Nile is becoming the norm and it seems like we are just commuting..if someone asked me where I was going…’oh I’m just going to watch the footy over the Nile’….and the other wouldn’t bat an eyelid. We arrived at the game and it was certainly competitive and funny! The locals kept laughing at us as they saw the British Passion to Footy and blaming the ref! We also saw loads of kids from the Paraa Primary School and we chatted to them and they introduced their parents to us. It was really good to see families here and it made me think back to my family…hope they are doing okay… 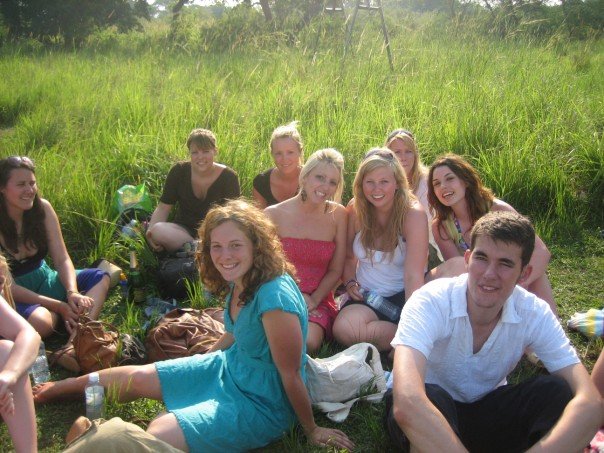 Some Softpower Education reps also came and they brought a couple of volunteers with them for a separate project. I met Jen, an American student, who joined Softpower to help out. It was good to chat to another brand new person and I got endless ribbing from the others afterwards that I was flirting with her!

We had to leave just before the end, but Paraa was definitely winning woop woop!, but we needed to catch the last ferry across the Nile to get back to our accommodation to put on our entertainment for the locals allegedly. But first! The locals gave us their own traditional dances and songs. The shoulder dances were a sight to behold! Soon we were all up on our feet trying to imitate their dancing and then…it all came to a stop. The locals sat down and expected us to entertain them…oo…er. We were extremely poor and sang anthems and ended with the Grease Megamix..oh dear. Phil walked away from us all claiming he has no connection to us lot and the locals were beside with themselves with laughter at our very poorly tuned voices! However, we all saved the day by doing the CONGA! Da da da da da CONGA! da da da da da CONGA! All of us came together in one huge line and they followed our sideway kicks. They had a riot! But the line was broken by Charles, the Education Centre Leader, who suddenly pelted away running towards his room..all of us stopped and watched him running. As he neared his room, suddenly 2 baboons ran out of his room carrying several items! Charles picked up a rock and threw it at them screaming in his local dialect…sounded like a curse! It was ever so funny and all of us burst out laughing! Charles turned round to us with a sheepish smile and then carried on running after the thiefs! We all had a bit of a party and we all went to bed feeling relaxed and smiling from the laughter of today! 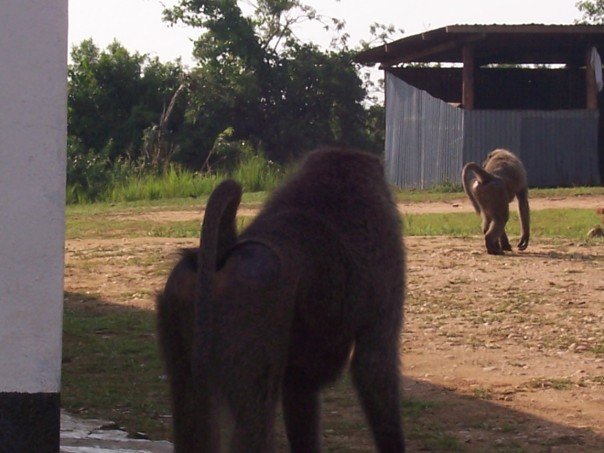