When I Became The Latest Attraction in Dubrovnik…

I stared aghast as bulbs flashed from millions of cameras pointing my way. Stunned was the word for me as I couldn’t comprehend what had just happened.

I had just became the latest attraction in Dubrovnik on my last day in Croatia and there was no getting away from it.

In truth, gazillions of images of me with a perplexed look on my face must be circulating the internet now.

It was in a situation totally out of my control and my deafness had actually caused all this.

So here is my story when I accidentally became an attraction in Dubrovnik.

Did I tell you I was naked in those pictures?

Oh dear, here goes. It all started at the Game of Thrones hostel, Fresh Sheets…

Finishing off my delicious continental breakfast with a coffee from the espresso machine,  I bade farewell to the receptionist as today would be the last day of my backpacking trip in Croatia. I had until evening to catch my flight so I decided to take a little trip out of Dubrovnik to Lokrum as I felt I had seen the city a little too much.

Tucked with a rolled towel under my arm and a small satchel full of beachy goodness stuff, I jumped on the ferry shuttle service from the harbour at the Old Town, paying 40 Kuna, and sailed the 600m to the island.

I was excited. More than excited. I couldn’t wait to visit the place I had seen up close from afar especially when I was up at the top of Mount Srd. 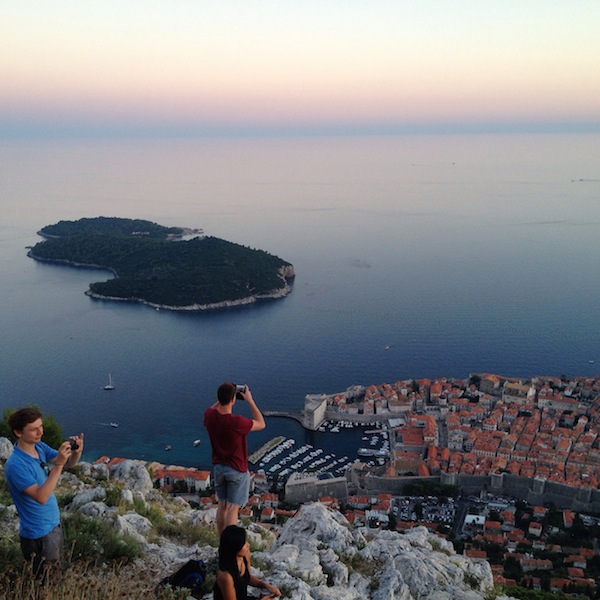 See More: Mount Srd in Dubrovnik Should Be Climbed By You (Or Not)

Like a huge enticing slice of paradise, it felt forbidden to set foot on it. This what those singing lads felt about their Bali H’ai while they threw their mops around at each other in South Pacific. But I’m going off on a tangent. I’m sure you want to know how I became the latest attraction in Dubrovnik.

The ferry ride was pretty quick, only taking ten to fifteen minutes but make sure you plan your day in Lokrum as there are hourly shuttles until 6pm. There’s no accommodation there so don’t get stuck!

Lokrum is a UNESCO protected national park and it’s got good reason.

Lush forests cover this island, which makes it an ideal getaway for the locals and clever tourists looking to get away from the cruise ship groups for the day. I wanted to relax with a book in a quiet place as now I was on my own having waved Mark off home the day before.

My sightseeing exploits were now over. I just didn’t expect to become a sightseeing icon myself.

Disembarking the ferry, I was given quite a few choices to do on the island. There were clearly marked paths and already the sun was beating down with such intensity that I felt I had to explore Lokrum in the shade to escape the midday heat.

First, I took a meandering woodland path all the way past a small lake that the locals were frolicking in, bringing a smile to my face. But what truly astounded me was the botanical garden that I stumbled across.

It truly felt that you were in the Jungle as sprouted palm trees from Brazil and South Africa dominated the scene along with some fairly weird looking cacti, one which reminded me of Mark. (sorry dude!)

But the next thing I saw was the medieval Benedictine Monastery, which served as a set for the popular Game of Thrones series as well. Although still being renovated, the building still looked pretty epic and it was nice to explore around it before having lunch, my lithe body propped against the side.

But I’m sure you want to know what happened to me later on that day?

Well, let me set the scene.

The Scene is Set… 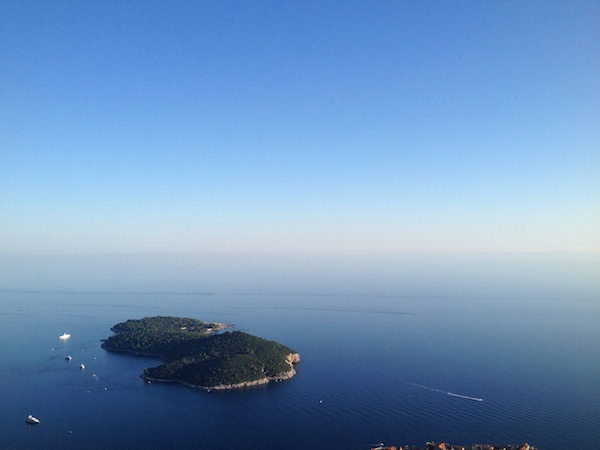 As early afternoon rolled on by, the sun was just cool enough not to be sunburnt to a crisp within a few minutes. So, excitedly, I went in search of a beach to do a spot of swimming. I checked out a few but I was a little disappointed to see the beaches were rocky, not sandy. So, after a while, I gave up and propped myself on a low inclining rock face, accessed through a small cafe and following the sign marked ‘FKK,’ that looked out towards the Adriatic Sea.

Stripping down to my swimwear, I jumped in and marvelled at the warm sea that lapped ever so smoothly against my skin.

It was the perfect chance to reflect on the last 18 days of backpacking in Croatia and be glad how I got to travel in this wonderful Balkan country. It has been a journey to remember. I smiled at the thought of being surrounded by Finnish beautiful women in Split, the funky vibes of Hvar and the wonderful culture in Dubrovnik. I grimaced at the Baklava we had in Zagreb, the horrific hostel in Korcula and the tantrum I had before coming to Dubrovnik.

Closing my eyes, I drifted close to the shore.

There’s just a sheer drop into the sea once you jump off the side and to climb back onto the shore, you need to climb up a few ladders.

Suddenly, I felt a splash on me and waves rocked me as I spat out inhaled sea water. I turned to look at the offending person who disturbed me to give him a stern look. Instead of an apologetic face to reprimand to, I was faced with a white bottom sticking out of the surface.

Before I could comprehend what was going on, a shadow loomed across my face as a figure jumped off the side blocking the sun.

He was also naked as I could tell, with things flapping in the air as he broke the surface to go under.

Had I become witness to a group of friends’ skinny dipping dare?

I swam away from the shore line to exercise my arms and legs. I had just gone far enough to see the entire rock face and what I saw, made me giggle with disbelief.

Dotted on the rock face were pink and tanned bodies that lay prostrate against the sun. In a passing glance you may have thought it was people sunbathing normally, but if you looked harder, all of them were naked.

That’s right, guys, I had walked into a nudist beach.

It was a perfect place for it as it was very secluded from the sea, away from ferry routes. It was all hidden from view from Dubrovnik as well. You simply had the blue horizon of the Adriatic all to yourself. Oh, and a few private parts.

So, what was I thinking?

The answer to all three is no.

I was thinking how liberating it must be to swim in the sea with only the skin you were born with.

So, climbing back out, I moved myself away to a small alcove in the rock face where I couldn’t be seen by others on the ‘beach.’ This took a while and I ended up moving down the beach until there was a break into the rock face that steeped remarkably. I thought it looked like a massive cave but I wasn’t going to go in.

After all, I would have to swim in. This alcove would suit me great. No one could possibly see inside unless they climbed in. So, I was satisfied.

First of all, I removed my hearing aids and after looking round, doubly checking, I pulled off my swimming trunks. If there was any screaming of horror or joy, I couldn’t hear.

I just jumped back into the sea and, you know what? It actually feels better to swim naked. As I reflected on this, I suddenly had visions of a large fanged fish looking for a tasty worm that nearly propelled me out of the water.

But in, I stayed.

When I Became The Latest Attraction In Dubrovnik…

Feeling tired after swimming for half an hour, I climbed back into my alcove and let the sun dry the beads of water off my body as I stood. It was that warm.

So, feeling the energising rays of the sun, I don’t what possessed me to do a spot of Yoga.

I never do Yoga.

Now, I must remind you at this point, that I hadn’t yet put my hearing aids back in so I was still deaf to the world.

Also, I had my eyes closed as my head was still directly facing the sun.

So, the yoga positions I did. I did the downward dog. The hidden dragon, the ballerina and other names I’m probably giving positions to outrage the Yoga community.

But it was during the Standing Spread Eagle that I soon realised something felt wrong.

You know when you feel like someone is looking at your back? It felt like that with me.

So, I opened my eyes after having them closed for a good 15 minutes.

And what I saw had me aghast.

I yelped and covered my crotch with my hands.

There in front of me, my chortling readers, were a HUGE boat full of Chinese tour groups all staring unabashedly at me.

Oh, and they thought they would record this moment of seeing a lanky and slightly sunburnt British guy showing off his package in a ‘here I am, look at me’ kind of way.

And they probably had been taking photos of me the last five minutes.

I just hoped they didn’t capture me doing the downward dog.

I could see the Croatian tour guide was falling about laughing behind them, pointing at me and slapping his hat onto his side.

Turns out, I went past the boundary of the nudist beach when I came across this alcove. Also, the lookalike cave was actually a cave. And a popular cave at that for tourist boats to come in and out of.

I had unwittingly made myself a spectacle of myself and became the newest attraction in Dubrovnik.

The flashes on the cameras were still going as I shuffled round the alcove to hide behind a small rock, which made the Croatian guide laugh even harder.

I hoped they would go away. There were literally no where to hide. Except one place. The sea.

Keeping one hand a firm hold on my jewels and another hand to hold my nose, I jumped into the water and swam away from the boat.

I’m sure the boat would have followed if it wasn’t for the Croatian tour guide trying to get his breath back.

Now, I’m sure the Chinese will tell their families and friends about the tale they saw a rare glimpse of the most handsomeness guy in Western Europe appearing in the Eastern Mediterranean.

I could be ranked alongside the Loch Ness Monster as one of the most desired sights to see.

Except there’s photos of me flying around.

Day 13: An Unexpected Arrival in Dubrovnik

Day 13: The City Walls of Dubrovnik at Sunset

Day 16: Mount Srd in Dubrovnik Should Be Climbed By You (Or Not)