8 Unexpected Reasons Why You Should Visit Malta in 2018

Picture this scene 16 years ago in Malta.

‘Oh my god, this is so embarrassing!’

Smoke belched out behind me between my legs to the chorus of laughter that came from chortling Maltese locals who hung back on the bonnet of their cars, some with a cigarette in between their rough lips, and their eyebrows raised at the scene before them.

Here I was, sweating away, at the strains of developing muscles in my body, trying to push the god-damn hire car out of the ferry onto dry land at Gozo, Malta’s second largest island. Within, both of my parents sat blissfully unaware at the public humiliation I was subjected to.

Every time the hire car rolled to a complete stop, I would have to get out and push the car to jump start it. I didn’t mind really, it was rather funny to begin with as we were off exploring the islands on deserted roads. But here, as the first car to roll off the ferry between Malta and Gozo, everyone was waiting for me to go all Popeye and push the car off with ease. Not if you have to push the car off a steep uphill incline of a disembarking platform lip. So, again and again, I tried to push the car over this, only to fail and the car to push me back itself (how I didn’t get run over backwards by my parents remains a mystery still to this day). But it was the humiliation that almost traumatised me. Even the sight of a Maltese policeman doubled over in laughter remains seared into my mind.

With a reddening face, I started screaming at my Dad to help. He rolled down his wonky window and poked his head out with a guilty look:

‘It’s all right, I forgot to take the hand brake off!’

With a thumbs up out of the window, I heard the crunch of the handbrake release, and I effortlessly pushed the car off. Everyone raptured into applause and the policeman wiped the tears off his eyes. That’s what they were laughing about.

Climbing back in through the gap between the door and my Dad’s driver’s seat, I crouched down with a hand over my forehead with embarrassment and pulled on my sunglasses before shouting at Dad to ‘just drive!’ to get away from the laughter.

You might think I wouldn’t want to come back to Malta again, but you’re wrong.

This is the strongest memory I have of my time in Malta and I cannot stop chortling to myself about it when the memory pops into my head. Memories are there to be made on holidays but the strongest ones are the ones you just wouldn’t expect to happen to you and how you dealt with it. No-one has a strong vivid memory of sipping a weak cocktail next to a pool in a resort on holiday right? It’s all about the unexpected situations you get in and the unexpected activities and sights you’ll see.

So, that’s why I want to share with you the 18 unexpected reasons why you should visit Malta in 2018. Forget the resorts, it’s time to make memories and have fun doing them!

Celebrating Malta’s entry into the European Union on the 1st May 2004, there’s an international fireworks festival taking place at the end of April every year. Start with a bang for your holiday in Malta and marvel at the pyrotechnics of a tradition that is centuries old. Going back to the time of the Order of the knights of St John, firework displays is often an expression of rejoicing on special occasions such as a Grand Master or a Pope. Best to celebrate that rather than an grisly execution of Guy Fawkes in the UK, right?

What’s it with Malta and massive international events? It’s because Malta is just too damn good! They host the annual music festival, Isle of MTV, that features popular chart-topping acts and funky DJs that can make your nights fit to remember. Established in 2007, this can draw crowds of more than 50,000 people! Wow!

Did you know Malta is the top LGBT friendly country in Europe according to the Rainbow Europe Index in 2016?

Popular with gay travellers, Malta has a thriving gay community that will gladly share tips on restaurants, cafes, pubs, nightclubs along with gay-friendly hotels and other accommodation. Also, there are so many popular events too and none more so than Malta Pride.

If you’re looking for the next biggest party stop in Europe, here’s the place to be in September 2018!

If you’re looking for your tastebuds to remember delicious and detectable delights, then a trip down to the Marsaxlokk fish market on Sunday mornings will be just for you.

Fresh from the shores of Malta, you’ll find exciting dishes including Aljotta (fish soup), spnotta (bass), dott (stone fish) cerna (grouper), sargu (white bream), swordfish and tuna. If you’re really adventurous, why not try out the ampuka, dolphin fish and tuck in stews and pasta that make up of octopus and squid.

5) Dive through an underwater tunnel to Lantern Point

Forget travelling to the far side of the world to get the best diving spots. Malta’s clear blue Mediterranean Sea is a scuba diver’s playground. With caves, reefs and wrecks to explore, you’ll be able to see them in such clarity and excellent views as you dive further down. Luckily, there’s a low risk of meeting dangerous fish… bye Jaws.

But there’s a fantastic dive to Lantern Point where you travel to it through an underwater tunnel that’s over 50 metres long. Dare you to do this?

6) Grab a selfie in front of the Grand Harbour

Need that golden selfie to remind yourself of being in one of the most beautiful destinations in Europe? Then take a snap at the Grand Harbour sprawling behind you. It really is one of the most spectacular sights in the world that’s nestled within the big sea of the Mediterranean. Separating the capital city of Valletta from the towns of Vittoriosa, Senglea and Cospicua, you’ll definitely feel you are walking on ground that has seen activity for the last two thousand years. Take plenty of selfies as you must, after all, there’s fortifications, the sea, martitime activity and of course, your beautiful self to get in the picture.

Perhaps it’s time to take use of the panoramic setting.

7) Get involved in Europe’s Capital of Culture 2018

Wow, did you know that Valletta is the European Capital of Culture 2018? This one in a lifetime opportunity will showcase the best of Malta in one tiny capital that is huge on charm and history. Instead of staying at a resort in the remotest part of the island, why not be in the buzz?

Okay, you must be wondering, ‘what the deuce?’

There’s a Duck village in Malta?!

On the tiny island of Gzira, there’s a Duck Village thats a home for ducks, chickens and geese. There’s also activities for them too that includes swimming, sunning and sleep in their brightly coloured wooden houses. Even the locals warm to this village bringing stuffed animals and food for their feathered friends. A local volunteer started this sanctuary for animals that even include rabbits and guinea pigs. If you’re more interested in animals than people, this is definitely the place for you!

So here are my take on the unexpected things to see and do in Malta. But it doesn’t mean you can do only those things. Make memories of your own of what takes you out of your comfort zone. Ditch the cocktail by the poolside and get exploring! Dealchecker has developed this amazing infographic to help you plan your activities and where to eat on your next visit to Malta! Check it out below: 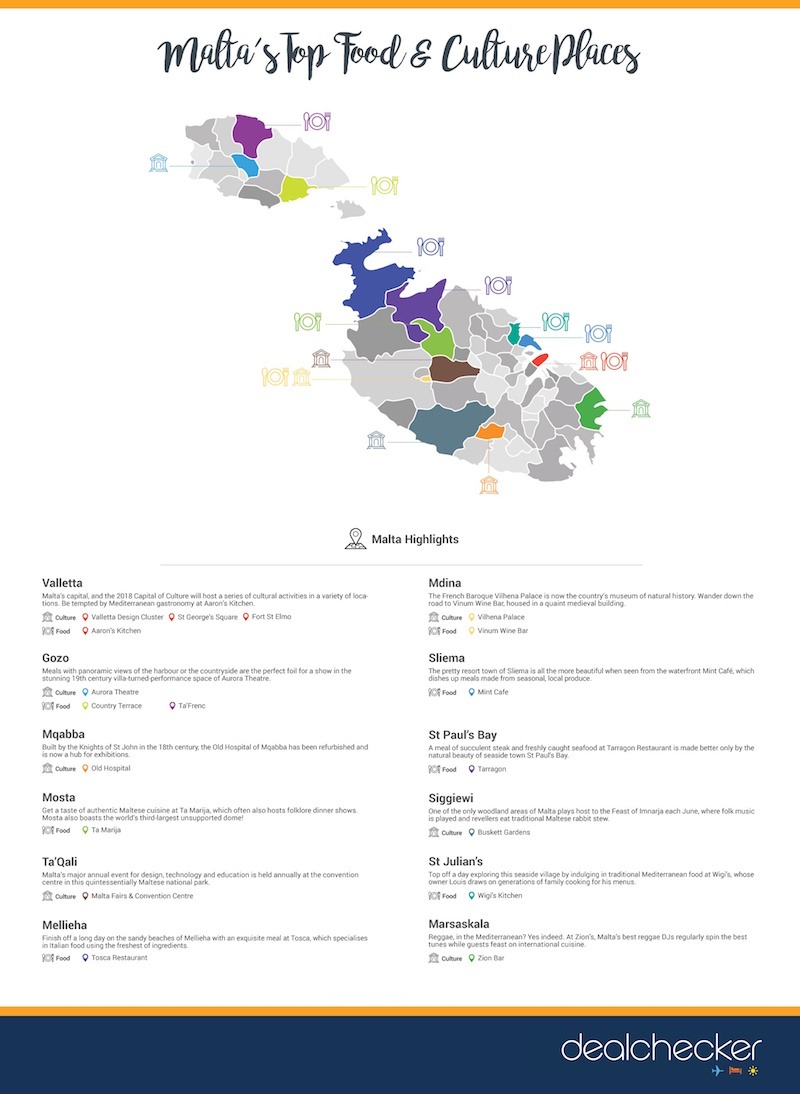 So, how about it? Shall we go exploring in Malta together?

This article has been made in collaboration with Dealchecker. As always, my opinions are my own.