Why I Hated Lisbon

Okay, you may be reeling with shock from such a direct and profound statement.

Yes, I absolutely hated Lisbon. Even I surprised myself. Even if I arrive in a city that’s not to my liking, I still give it a second chance. But oh no, I simply cut short my planned 2 night stay and got out of the capital of Lisbon after 18 hours.

My perfect description for Lisbon is this:

‘It’s like a revolution happened but no one’s bothered to clean it up.’

Weakly, Lisbon’s defenders would claim that the country is in the throes of an economic recession. Well, so are Greece, Spain and Ireland. But they still do fantastically well for tourism.

Lisbon was probably the most disappointing capital I’ve ever visited. I couldn’t believe Lisbon beat my disdain for Phnom Penh (Cambodia).

So why was it so bad that I had to leave immediately?

I had High Expectations of Lisbon

When I mentioned to my friends and travel bloggers alike about my impending visit, they enthusiastically claimed its a fantastic place to visit. I still had no clue what to expect there and so I imagined it to be a cosmopolitan city, brimming with high-flying locals, friendly atmospheres, a gorgeous beach and stunning architecture. Sadly, that was not the case. I had the serious cases of ‘letting me down.’ 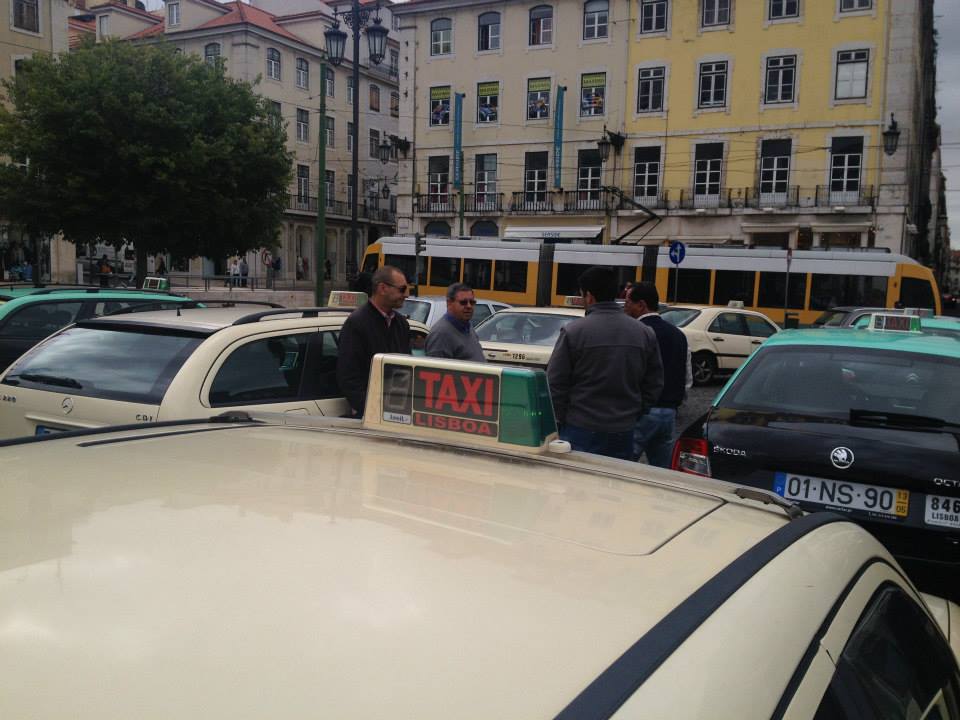 Hello, I want a taxi!

Last time I spoke to you, I was leaving Madrid after coming back from Andalusia. From there I headed straight to Lisbon on a 12 hour bus journey. Climbing on board, I was excited. I would have my first glimpse of Portuguese people. I imagined them to be Caipirinhas-swilling, laughing and generally happy people and wearing far less clothes than they should have. Also, they would have amazing teeth and be very friendly to everyone. I found this to be the case with the Spanish people so a country that has a shared history with Spain should have similar traits, right?

Wrong! As I was the first to climb aboard, I would see all the passengers arrive. And I would wish I didn’t. Dark, moody, frowns my way, disrespectful of the bus and not at all friendly. I actually didn’t feel safe travelling on the bus with them. I even feared for my hygiene. It smelt like a pig had died in its own poo. And they were coming from the people on the bus who were perturbed to see me covering my nose…well with anything.  Unwashed they were. Hugging my rucksack containing my valuables to my chest, I would fitfully sleep until I was jolted awake by a thwack on my seat. The couple behind me decided to have an all out argument complete with GBH. Great. I was relieved to arrive at a rest stop for the Spanish bus driver to intervene. As I sipped my coffee observing the blackness of the Spanish Night before we shortly slipped over the border into Portugal. The driver sat next to me with a sigh and gave me a weary look to say that it’s not the first time he’s seen this before. They were actually thrown out with their luggage on the side of the road, still arguing.

Going back to sleep, I was woken up to see the Lisbon Oriente Train Station loom into my view. I was so glad to get off the bus. Very Glad. That was my first brush with Portuguese people and they totally let me down. 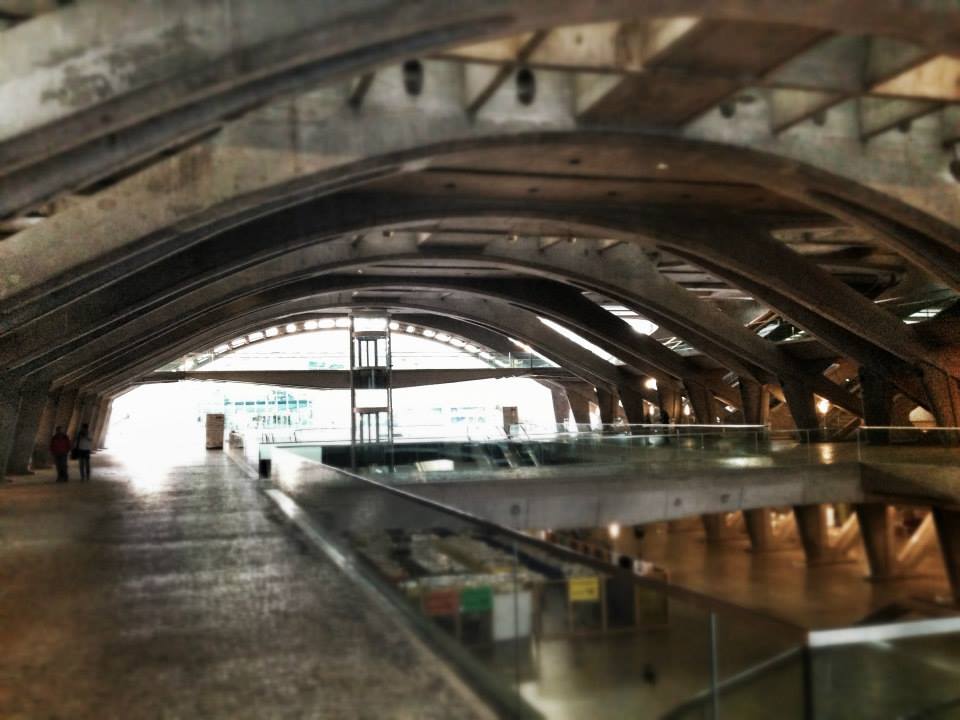 I think one of my disappointments is that it wasn’t like Brazil, the old Portuguese colony. Okay, I realise there are differences like the weather and the way people look but I expected the same vibe, excitement and happiness that Brazil brought. When I was in southBrazil in February, I had a whale of a time. In Brazil, it was easy to meet people, full on the streets; everyone was smiling and partying in their own heads. They had literally everything to smile for, even for the braces on their teeth.

But not Lisbon. It was empty even during rush hour and the people I did meet kept themselves to themselves with their heads bowed, glum and depressed. Those that are inquisitive, I felt their stare on my back, but not in a nice way. It really didn’t feel like a happy place to be. Even the buildings didn’t look happy. Of course, in Brazil, some buildings looked they were about to fall down, but at least they looked cheerful. The street art in Brazil was vibrant and interesting. Whereas in Lisbon the street art consisted of swear words dotted on the buildings that may have stood a chance of welcoming visitors to their city. 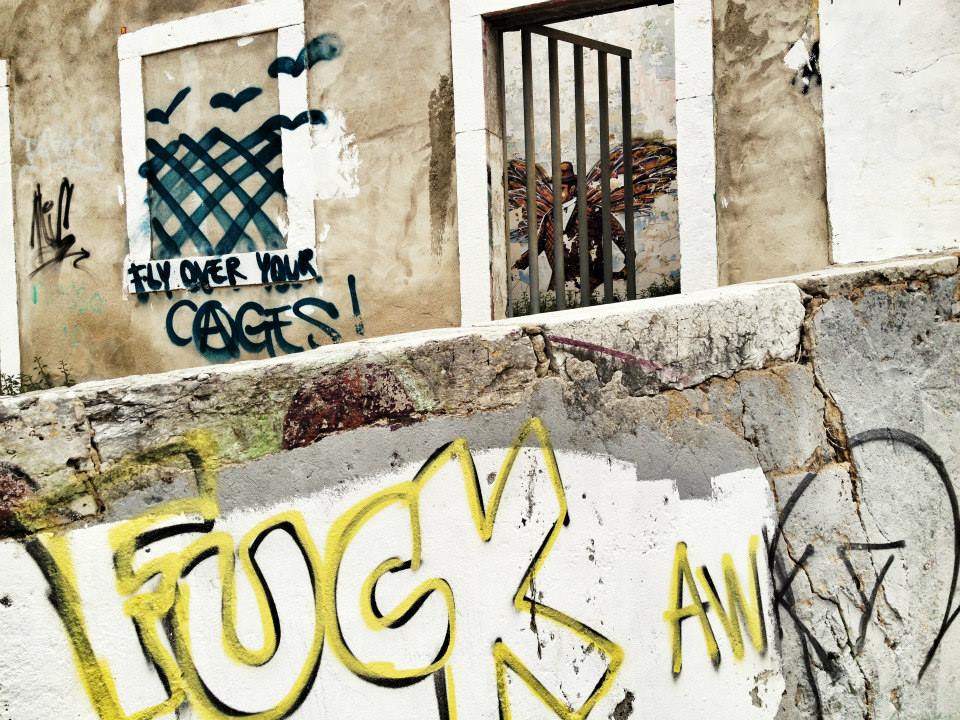 Lisbon was a capital that wasn’t proud of itself.

I often judge the cleanliness of a city by its streets. Even third world countries. So when I went to Bangkok, or even Buenos Aires and Siam Reap, I was very impressed by how clean the streets were. But that was a totally different story when I arrived in Lisbon. I was actually rather taken aback. The buildings looked like they were covered with soot or even dirt. Walking up to a building, I wiped my palm on one wall and it came away pitch black. Even the ‘historical’ looking buildings were not immune. It was rather disappointing to see the buildings go in a state. Perhaps my standards stemmed from my parents freaking out if there’s a house down our street that looks like it hasn’t been cleaned for a while. Needless to say, they get theirs sandblasted or washed every couple of years. And again, crude street art littered the place. 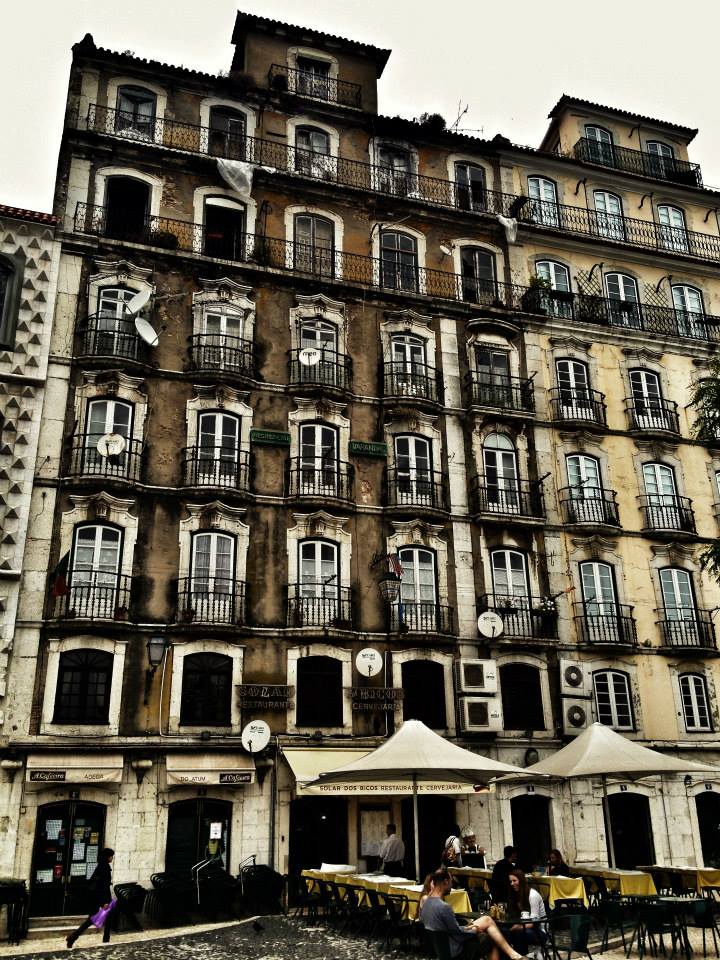 Throughout my walking tour that day, I could see the walking tour guide trying to lead us away from ramshackle and broken places but my inquisitive nature took over and I was truly disappointed what I saw. Just disappointment.

When evening came round, I joined 2 other people from the hostel to find some drinks. It was already dark and walking through the seemingly empty streets made me look around more than normal. I just felt unsafe. This was in the city centre and I began to worry about my well-being as gruff looking men eyed up the girls I was with. I would protect them if I needed to but probably to my disadvantage. Luckily, I managed to wave them off when they approached with a dangerous gleam in their eyes and hurried the girls along. I didn’t feel like this in Madrid or even Hanoi. 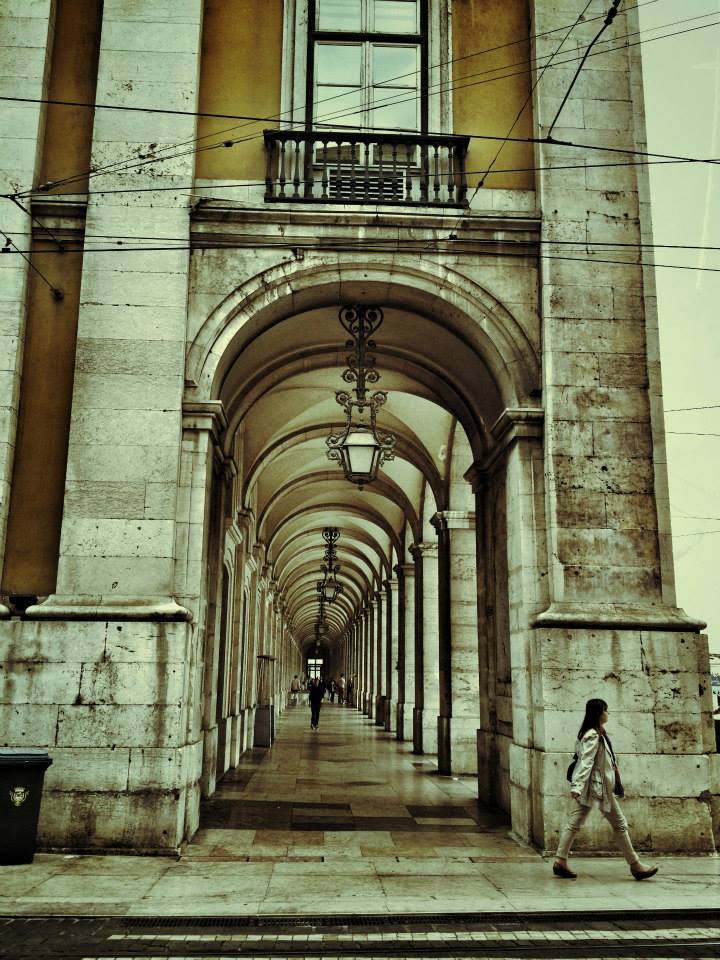 There’s Nothing To See

Literally, there’s nothing to see. Unless you want to see the knock off Christo the Redeemer that’s even smaller than the real one. I remembered my disappointment seeing that in Rio so I wasn’t exactly going to see the ‘shitter’ version. Browsing the ‘what to do’ section in the hostel, I noticed with alarm that all of them were advertising trips OUT of Lisbon. I’ve just spent 3 hours in Lisbon and already I was bored. Talking to the receptionist where’s good to go in Lisbon, he looked lost for words. Then said either a beach or a Fado Night when you had to grab a chair 2 hours before the event started to get a good view. And you can’t just stay and sit, you had to keep buying drinks otherwise the establishment would throw you out for using up their valuable drinking space. I half-heartedly decided and said I would go to a Fado night, a Portuguese style of music, to some others at the hostel. But I was met with sullen stares who stated they weren’t spending their time just sitting down. I sure wasn’t going to walk to a Fado Night on my own, I didn’t feel it was safe to do so. 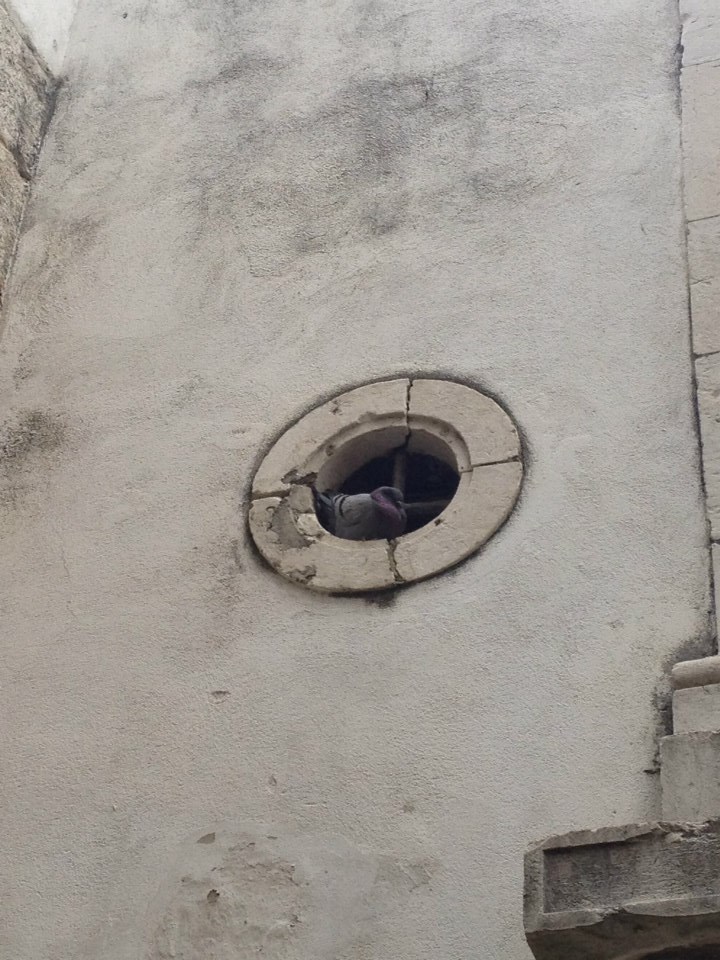 Even the pigeon here looked depressed

However, as I started to mooch around thinking I should go on a day trip out of Lisbon, a walking tour guide burst into the hostel and asked if anyone was interested in doing a tour of the city.

The Walking Tour Was Rubbish

Really it was. Many people and travel bloggers know that I LOVE Walking Tours whether they were accompanying me or being dragged along. So as I began to mutter dark thoughts about Lisbon, I signed myself up to a walking tour hoping that it would be the saving grace of my impression of the city.

And I wish I could tell you about the sights I’ve seen in Lisbon. I can’t because there was literally nothing to see whilst I ambled around in an extremely bored manner. The tour guide admitted it was her first time doing the walking tour on her own (extremely eye rolling ensued) and she was being assessed by a head guide who followed us around, looking important with a clipboard and no paper on it. So, I could have made allowances to let her off with some stuff that she may have forgotten as I’m a nice guy who like to encourage those who are nervous. But actually, I wouldn’t have passed her. She didn’t talk loud and clear. She didn’t really engage the group with stories. She just pointed at a sight and said ‘look at that!’ and left us to stare bleakly at it. I considered leaving the walking tour halfway through when she announced we would be taking a break. Throughout then, I was being chased by a legless homeless man who jabbed violently his crutch (read carefully, I said CRUTCH not CROTCH!) on my chest and demanded money with evil intent in his eyes. I was shocked. He was so rude. Even the beggars in SE Asia and Africa gave me respect. 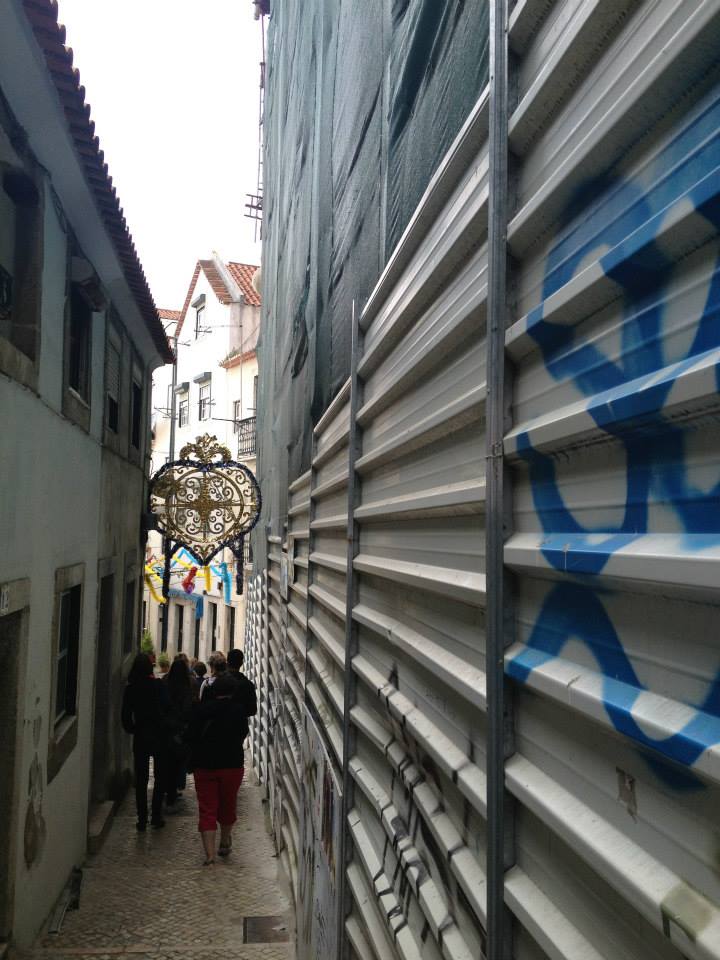 ‘Are we nearly there yet?’

However, I stuck with the walking tour only because I couldn’t figure out how to get back to my hostel on my own. During that time, I spoke with the head guide about his job. He noted that he had to train a lot of people to be guides recently. After I asked why, he simply shrugged his shoulders and said, ‘they leave within a couple of weeks.’ Leaving him to stare at the clipboard looking like he was doing his job, I could see why. There is literally nothing to show visitors in this depressing city. I suspected they joined the other tours advertising day trips OUT of Lisbon.

Giving my thanks to God when we finished in the late afternoon, I trudged back to the hostel and immediately went on my laptop. There, I booked to get the hell out of Lisbon on the first train the next morning. After a sleep and annoyingly found that someone used my towel to clean his dirty body (probably from accidentally scraping himself on a building), I rushed to the nearest train station and breathed a sigh of relief when I saw Lisbon grow smaller in the distance as the train rolled south.

Already I was happy, the train was actually rather nice and luxurious. Leaning back, I really hoped that my next Portuguese destination would be better. Heck, anything would be better.

I was very disappointed and even more so to be negative about a city that once was a bustling capital of the world. Maybe I’ll be back to change my mind but you know what? I won’t be in a hurry to do so.